Tattoos have become a rage among all age groups in recent years. But Indian traditional tattoos and tribal tattoos have been popular in India since ages. Although temporary henna tattoos are popularly used in traditional celebrations in the country. But, the history of permanent skin tattoos in India is more than 100 years old. The ancient maze-like patterns, found on the rocks dating back to the time of 1000 B.C., were later adopted by certain tribal communities in India as permanent markings on their arms and other body parts.

Here are some details about Indian tribes that embraced tattoos before popular celebrities and rockstars. Arunachal Pradesh’s Apatani tribe – To prevent Apatani women from being kidnapped by neighbouring Nishi tribesmen, this tribe used to get faces of women inked to make them look unattractive. The procedure of Apatani tattooing was very painful. They used thorns to cut the skin and later put a soot mixed in animal fat into the skin for getting that dark blue color. 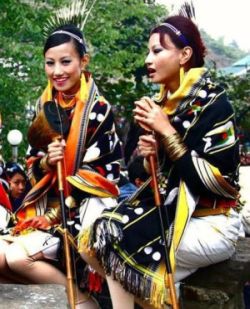 The wounds were left open to get infected so that the tattoos become large and clearer. Despite being considered traditional by many tribal people, this inhuman practice was banned by the Indian government in 1970s. However, some elderly women from Apatani tribe can still be seen with permanent ink on their forehead to the tip of the nose, and six smaller lines boasting on their lower chin.

Another Northeastern tribe, Singpho, found both in Assam and Arunachal, follow the tradition of tattooing both legs of married women from ankle to the knee. The men have to sport tattoos on their limbs as well. But unmarried girls of Singpho tribe are abstained from wearing a tattoo. The permanent tattoos are called pachakutharathu in some parts of South India. The tattoo tradition has been popular in South India, especially in Tamil Nadu even before 1980. In this region, most nomadic Korathi tattoo artists used to travel across the countryside to seek new clients. The kollam, a sinuous labyrinthine tattoo design was popular back then – as it was believed to ensnare evil beings. It was inked permanently on bodies to keep people safe until death.

A popular Toda tribe of South India used to get their hands, calves and shins tattooed with embroidery-like geometric patterns. Orissa’s Kutia Kondh tribe were known as ‘the people of the spirit world,’ hence they inked themselves with geometric facial tattoos to recognize each other afterlife. The barbaric tradition of getting inked even existed in Central India. The Dhanuks tribe of Bihar believed in de-glamorizing women to protect them from the eyes of influential sex predators. Moreover, women from lower castes still have to cover visible parts of their bodies with tattoos to signify others of their inferior status.

The Munda tribe in Jharkhand considered tattoos as symbols of courage to embark certain historic events. This tribe defeated the Mughals, so to commemorate their victories Munda men tattooed three straight vertical lines on their foreheads. The Gonds tribe traditionally left their bodies exposed and covered the bare skin with kohkana (Gondi for tattoos). Western tribes of India are known for crafting tattoos to symbolize a close relation to secular and religious subjects of devotion. The Rabari women of Kutch embraced tattoos for decorative and therapeutic purposes. They used a single needle and liquid pigment (made out of lamp soot and tannin from the bark of local trees) to permanently tattoo their skin. To prevent swelling, they used to apply a turmeric paste over the tattooed skin. Rabari women used to ink their necks, breasts, and arms to signify tribe’s firm belief in magic. 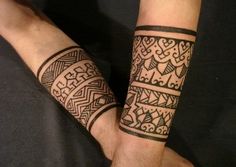 So, these were some of the traditional tribes in India that embraced tattoos centuries ago. Although still, some taboos surrounding tattoos exist in certain regions of India, but tattoo tradition has come a long way. It has evolved as an art form in last few years and even people are more accepting of tattoos nowadays.